As promised on the Twittersphere, I wanted to use the article I wrote in July and go through how I am going to use that information for this year. If you are late to the party, you can find “The Kicker Resurrection” here. This article here I am just going to focus on the first two weeks since Vegas odds only go out that far for now. After two weeks, more information will be available, as will medians vs. averages, though not very predictive at that point. For now, I will use last year’s medians vs. averages and the expected point totals to give as good of a projection as I can.

Luckily for us, Linda (@lindellions) has done the leg work and given everyone a breakdown of the kickers throughout off/preseason. It is a two-part tweet series that can be found here and here. Using this information, we can get a much better grasp on what kickers to focus on and which we should fade due to team uncertainty.

Reading through the list, these are the kickers that I am avoiding: Randy Bullock and Greg Joseph. To sum it up, kickers already create unstable situations, so I am taking any bad news as a disqualifier.

These tiers are based on four main principles; the Vegas point total and odds, if they are home or away, and their median was higher than their average last year. I have chosen these four based on my own finding combined with Jennifer’s; both were highlighted in the article previously hyperlinked. Each player is given a score for their first five weeks to differentiate the upside differences better. The scoring legend can be seen below. 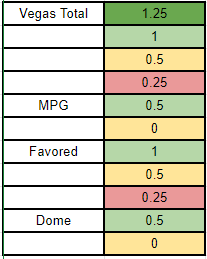 The Vegas total is a contribution from Jennifer Eakins article on 4for4, in which she found predictive correlations to the total of a team and the average points a kicker had. I also gathered every kicker’s median over average. The thought process here is that this tends to carry over the following season, so emphasizing kickers more likely to exceed their average is something I wanted to utilize. The favored section is pulled from the other kicker article regarding kicker’s likelihood to exceed their average in games they won. For those not understanding, the spread ‘-’ means how much a team is projected to win by, and the ‘+’ is how much the team is projected to lose by. Since this is projecting out prior to the season and the volatility of the NFL, the points awarded are closer bunched together. Lastly, whether or not the game is in a dome, reducing the factors for kickers missing is why this is included.

First, I want to say for foreword here, after the first two weeks, the lines from Vegas will be changing, especially once we get into the fourth and fifth week. What that means is the lines within ‘3’ are the highest risk to go from an over to an under or vice versa. So this article will be a template for you, but it won’t be doing all of your work, week in and week out. 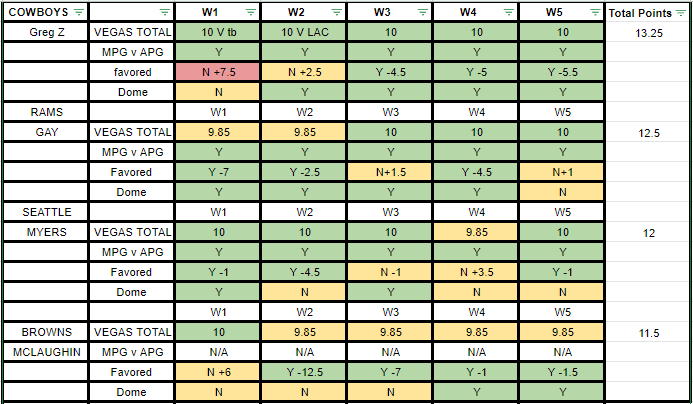 This tier is exactly as the title says; these are the kickers that I am projecting to have the highest likelihood to be the top scorers through five weeks. Greg Zeurline has had a back injury in the offseason, so he is someone to monitor on the injury report. Zeurlines ADP from ESPN is currently sitting at pick 163.9 (K10). Matt Gay is another kicker tied to a great offense, so it is not that surprising that he is in this tier; Gay’s current ADP is 146.9 (K8). I would say the biggest surprise of the tier are these last two kickers. Both are tied to good teams, and both offenses wouldn’t be deemed as high-scoring teams. Jason Myers and Chase McLaughin are separated quite a bit by ADP, with Myers at 131.4 (K3)and McLaughin 169.7 (K20). To me, Myers is the biggest fade out of the bunch if I had to choose, but they are all great options to shoot for. 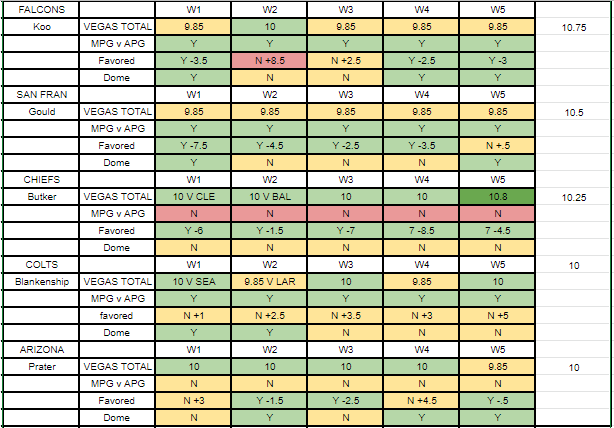 This next tier here consumes most of the popular kicker names, the ones who have been around long enough for most fans to recognize quickly. This tier is a bit tricky, as the ADPs offer an advantage over the first tier. Younghoe Koo is an extremely popular name as he managed to finish second overall last season even with a missed game. Koo’s current ADP is 131.7 (K4), only being surpassed by Myers from the first tier. Robbie Gould is another kicker who has been around longer than most and finds himself on a potentially new offense if Lance can deliver the upside the fantasy industry is placing on him; his current ADP is 169.1 (K14). Harrison Butker, I would reckon, has been the top kicker by ADP for probably close to three years now, and he has only finished as the top kicker once. Rodrigo Blankenship, I think, belongs in the Heavy Hitter tier, but with concerns at quarterback and the offensive line, it is hard to project them. Blankenship could easily rocket into that tier if Carson Wentz is healthy and those spread lines switch on their head; his ADP is currently 166.6 (K12). Matt Prater is now a Cardinal which means he is going to have the benefit of that offense and how many plays they run in a game. Prater is a bit of a darkhorse after such a lackluster performance last year; his current ADP is 166.3 (K11). 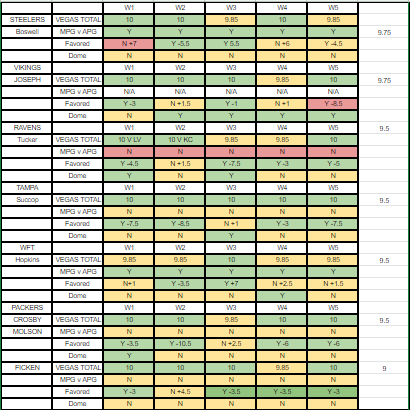 This tier is exactly as it’s titled; they need a bit of a fairytale in order to achieve being the top scorer through five weeks. I want to lay out what needs to happen for each and every one of the kickers to make it happen. Chris Boswell is currently being drafted at ADP 169.4 (K16). The Steelers are well equipped to have another high-scoring offense, but that all lies upon the brittle body that is Ben Roethlisberger. For Boswell to achieve his fairytale, he will need that offense to be running at the clip it was back in 2018. Greg Joseph is currently getting the Vikings kicker treatment being drafted at the ADP of 170 (K38). His biggest knock for this scoring was the lack of data on his median over average. If he can manage that in this stretch, he has an honest shot as the top-scoring kicker. The biggest surprise here was Justin Tucker, currently being drafted at the ADP of 104.8 (K2). The big knock against Tucker was he did not have a median over average, and a few of his games do not project to be that high scoring which impacts his scoring ability. I feel comfortable that he will be a Top-5 kicker, but the start of the season is not the most ideal. Ryan Succop also suffered from a median below average and having only one of his games being played in a dome. His current ADP is 169.4 (K17), which makes him one of the best values of tier. Depending on who wins this kicking battle dictates this, but given the fact it seems to be surly Crosby, he is going to need the Packers to be just like last year offensively. He also needs to get the boost of exceeding his average during this stretch; his current ADP is 168.2 (K13). Sam Ficken is going to need a lot to reach the top scorer, but luckily that offense may be leaning more on the pass, which could lead to a higher rate of scoring opportunities. They just need to get over this small Covid-19 scare first. Ficken’s current ADP is 169.9 (K25). 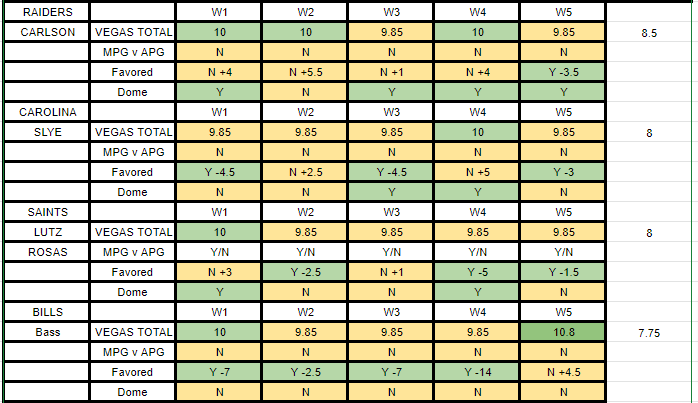 To keep this tier quick and easy, these guys just don’t have the upside based on these projections I have. That doesn’t mean they won’t, but they have an outside shot at being a top scorer the first five weeks. My best bet is Tyler Bass, who can easily have ample scoring opportunities tied to Josh Allen and company. Their current ADP’s are as follows; Carlson 169.7 (K18), Slye ADP 170.0 (K50), Lutz/Rosas ADP 169.9/169.9 (K28/31), and Bass ADP 158.4 (K9). The best value, though, at ADP is Carlson, a kicker who finished K3 last season can easily have a repeat season though based on what I found out last year is an unlikely venture. 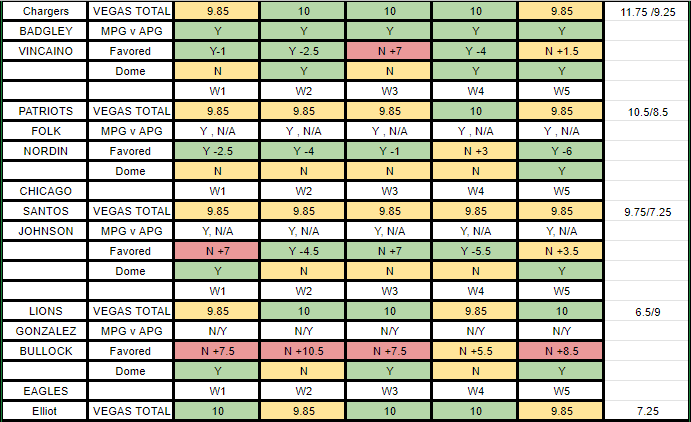 This tier, as you can see, offers a wide range of outcomes, mostly outcomes I don’t care about but two that I do. The Chargers and the Patriots are the teams here that have peaked my interest. The issue was which kicker will win; well, the rookies become victorious now. Tristain Vizcaino and Quinn Nordin, having won the camp battle whose ADP is currently 170/170 (K37/58). As with this tier, it is one to watch closely, and if one of these kickers is able to show consistency, they could become a serious advantage this season,

My hope here is that this is able to provide a better framework in projecting kickers and assisting with the weekly streaming options. This ideally offers a better solution to weekly streaming, replacing it with a phase streaming, three to four weeks instead of one to two weeks at a time, and allowing managers to better capitalize with their waiver wire and save FABB for other important pickups.