Due to Superflex ADP being relatively scarce beyond 2018, I had to use a combination of sources in order to get a sufficient sample size of at least 5 rookie drafts/year (higher than this for most years).

My colleague, Eric Burkholder, and I decided on these thresholds with the purpose of finding the rate at which true difference makers are drafted at each position.

During this time of year, seemingly endless rookies are touted as the “next big thing.” This study is designed to help you block out the noise, and discover just how many of these rookie draft picks actually turn into valuable young building blocks for your dynasty teams.

It’s easy to fall prey to rookie fever, and fall in love with the unknown of rookie draft picks. The allure of knowing there’s a chance of drafting the next young superstar is often enough for dynasty managers to ship away quality proven assets. While hitting on the next Odell Beckham Jr. or Patrick Mahomes can be a huge boon to our squads (and a ton of fun), it’s important to also understand the risks that come with these rookie picks.

The golden currency of dynasty fantasy football, early-mid first round rookie picks, are highly sought after and valued as a precious commodity. This is for good reason. Dating back to 2014, there have been more players with 3+ hit seasons drafted from 1.01-1.06 than there have been from 1.07-2.12 combined. The 3+ hit rate falls dramatically from 1.01-1.06 to 1.07-1.12, which indicates fantasy managers should err on the side of caution when acquiring picks within the later half of the first round. Moving up from the 1.07-1.12 range to the top six can also be a wise move, if done at a reasonable cost.

Even still, the top six range of the first round has only provided players who produce three or more hit seasons at a 30% rate; underwhelming to say the least. This isn’t to say you should trade your rookie picks away at all costs. Rather, you should keep a level head when evaluating rookies; remember that while some draft classes are stronger than others, many highly rated rookies are inevitably going to bust.

When looking at second round hit rate, the dropoff from the first half to the second half absolutely jumps off the page. In fact, the 1+, 2+ and 3+ hit rates are lower from 2.07-2.12 than they are in the fourth round! An obvious consequence of this shocking metric is that dynasty owners should always try to trade up in the second round if they own picks in the 2.07-2.12 range. It can often be relatively inexpensive, and by doing so, one greatly increases their chances of hitting on their second round pick.

Searching for the “why” behind this peculiar discovery inspired me to undertake a more in-depth breakdown, seeking to shed light on the puzzling trend.

One of the first things I asked myself was, “how different would each hit rate be if filtered by position?” In other words, if drafting in the 1.01-1.06 range, what’s the historic success rate of selecting a running back versus a wide receiver or quarterback?

After gathering the data, I can confidently say that knowing this information will help you significantly increase your chance of hitting on rookie picks. First, you’ll have an edge over your opponents when it comes to avoiding potential landmines. Second, you’ll understand how your chances of hitting on a given pick can often double or be sliced in half depending on which position you target.

The players who’ve had their ADP in the top half of the first round are fairly evenly split across the QB, RB and WR positions. In the last seven rookie drafts, we haven’t had a single TE with an ADP within this range (although Kyle Pitts has a good chance of changing that this year).

The running back position clearly reigns supreme when it comes to early-mid first round rookie picks in the superflex format. Of the 17 running backs with an ADP in the 1.01-1.06 range going back to 2014, almost half of them have given you 3+ top 15 seasons. Looking at the quarterbacks, only 20% of them have given you 3+ top 12 seasons, and only 25% of the wide receivers have produced 3+ top 24 seasons throughout their careers thus far.

While the percentages certainly point to running back being the safer pick within the top half of the first round, it’s important to put these statistics into context. I am not suggesting that you should always select a RB over QB or WR in this range. However, understanding that QB and WR have a significantly higher bust rate than RB can help you avoid players at the former positions that you’re on the fence about. Furthermore, if you’re deciding between a RB and a WR or QB that you have in the same tier, chances are you’re better off taking the RB.

The back half of the first round is almost antithetical to the front half. Unlike the 1.01-1.06 range, you are generally better off taking a WR than a RB from 1.07-1.12. The QB position has an especially small sample size for the 3+ metric, as the only QB’s drafted in this range from 2014-2018 were Teddy Bridgewater, Blake Bortles, Carson Wentz, Paxton Lynch, and Lamar Jackson. Further, the current 0% 3+ hit rate is misleading, as Lamar Jackson is currently at two hit seasons and has a great chance of making it three in the coming year or two. Another quarterback who was drafted in this range and seems likely to reach the 2+ and 3+ thresholds in the coming years is Justin Herbert.

Long story short, you are better off going with a tier one wide receiver or quarterback than you are reaching for a second tier running back at the end of the first round. Using this data, you would’ve been less likely to reach for Ke’Shawn Vaughn last year, and more likely to select Justin Jefferson, CeeDee Lamb, or Justin Herbert.

When looking at the front half of the second round, the QB and TE positions have too small of a sample size to draw any meaningful conclusions from, so it’s best we focus our attention on RB and WR. While RB beats out WR when it comes to 1+ hit rate, WR slightly edges RB with 2+ and 3+ hit seasons. Essentially, it’s a wash. There is very little to be gained by leaning into one position over another in the beginning of the second round, so take the prospect you like most. It is worth mentioning that there’s very little precedent for taking a QB or TE, so you’d be betting on an outlier by selecting one of those positions.

One thing to be mindful of is that the running back position actually has a better all around hit rate from the 2.01-2.06 range than it does from 1.07-1.12. Consequently, you should trade down from the late first to early second if looking to select a particular second tier RB. You are ultimately better off letting the value fall than you are reaching for positional needs. Drafting for value and trading for need is a good guideline to be cognizant of when heading into your rookie drafts (and even startup drafts for that matter).

Alas, the most perplexing six pick range in this study. Despite QB and TE having a small sample size, getting a sense of the complete picture could help us uncover why this pick range has been such a disaster the last seven years. While five quarterbacks generally isn’t a predictive sample size, it’s nonetheless safe to say this is not a great range to be selecting a quarterback in.

The main focus of analysis should undoubtedly be RB and WR, as these two positions account for 79% of the sample. Although the RB hit rate from 2.07-2.12 is less than half of what it is from 2.01-2.06, it’s still considerably better than WR hit rate in this same range. Of the 16 WR’s who’ve played two or more seasons, not a single one has accomplished two or more hit seasons.

However, it’s vital that we understand this is not because WR talent has dissipated by this point in the draft. Rather, dynasty managers are simply selecting the wrong receivers at a very staggering rate. There have been plenty of productive wide receivers with an ADP in the third round or later, as we will dive into shortly. 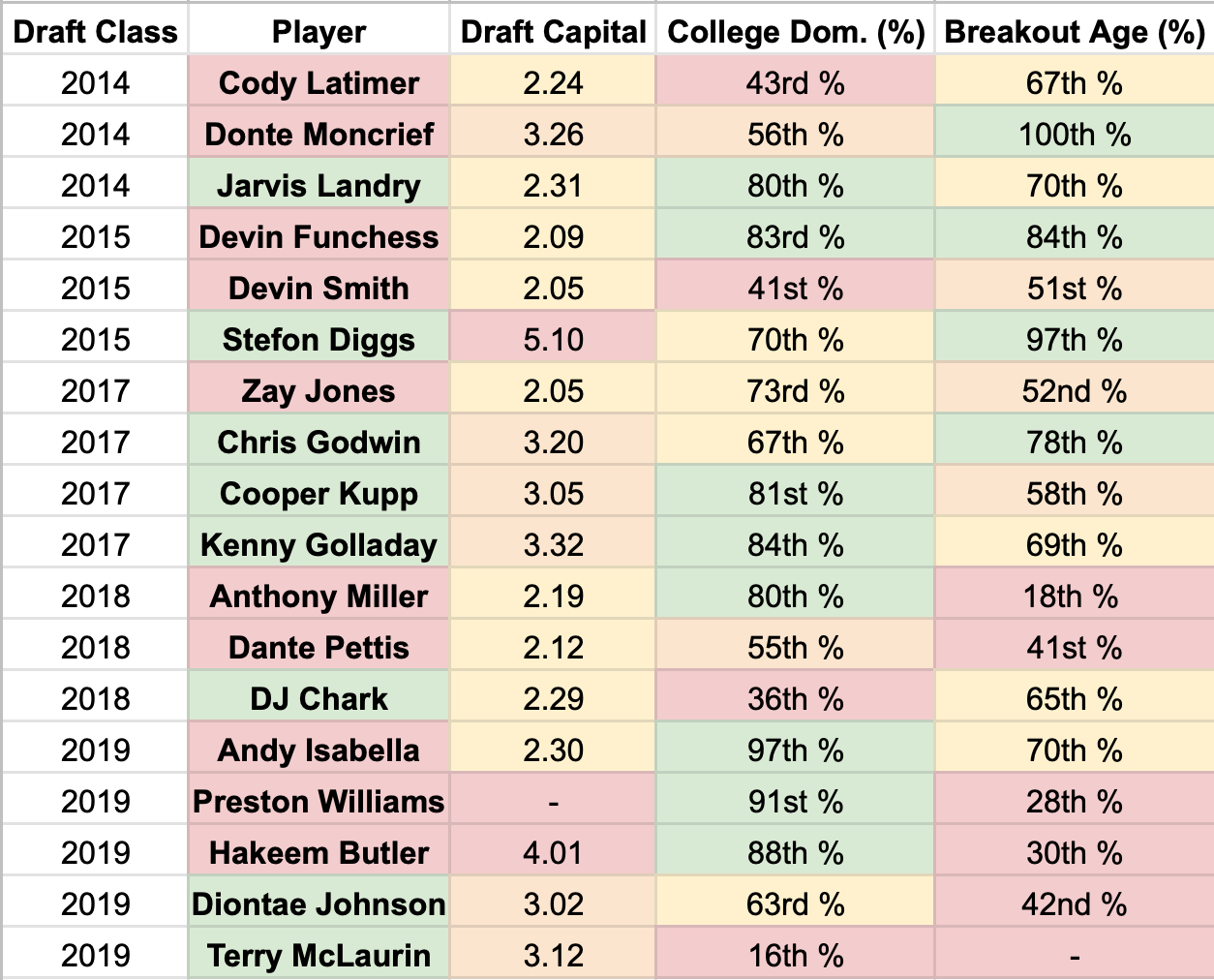 Of the busts that we’re looking at in this range, 70% of them were selected in the early-mid 2nd round of the NFL Draft. Out of the “hits” that were overlooked by fantasy managers, 75% were selected in the 3rd round or later of the NFL Draft, and the other 25% were taken at the very end of the 2nd. This data suggests that in the 2.07-2.12 range, dynasty managers have been reaching for inferior prospects (especially at WR) based predominantly on draft capital.

Another important common denominator amongst many of the players who ended up busting is that almost all of them (80%) had a red flag in the form of a poor college dominator rating, breakout age, or both. The only two players who busted while ranking highly in both of these categories are Devin Funchess and Andy Isabella. On the other hand, Golladay, Godwin, Diggs and Landry all had a 69th percentile or better score in both breakout age and dominator rating. These prospects dropped in the NFL draft, but they shouldn’t have in our dynasty rookie drafts.

Out of the 24 quarterbacks with an ADP of 2.07 or later, only two of them had one hit season, and only one of them went on to have two or more hit seasons (Dak Prescott with three hit seasons so far). It’s an absolute shot in the dark to take a QB anywhere after the early-mid 2nd round, and you’re ultimately better off taking another position in almost all scenarios.

Amongst the 59 running backs with an ADP in the third or fourth round, only one has had two or more hit seasons (Aaron Jones). This data tells a precautionary tale of taking running backs and quarterbacks in round 3 + 4. There are, of course, always exceptions. However, if you want to play the odds, you’d be smart to target WR and TE in the last two rounds of your rookie drafts.