Chris Carson is a bull of a running back that runs downhill with authority and aggression. He’s a versatile back that can catch passes out of the back field and pass block extremely well, giving him the opportunity to be on the field as a 3 down back. He’s effective between the tackles and almost ALWAYS gains an extra yard or two after contact.

With Seattle, he’s been a perfect fit for the Schottenheimer offense, looking to pound the rock regardless of who’s the chef cooking at QB. This coaching philosophy has benefited Carson, so heading into free agency his landing spot will be huge for his value.

I truly hope he ends up back in Seattle for Carroll, who wants to run the ball even more in 2021. Chris Carson in Buffalo scares me mainly because of Josh Allen, who will take 100+ touches away from him with 49 of those coming inside the 20 and lemme say this loud and clear 7 RUSHING TDS in the REDZONE. Eeek. Then sprinkle in Zack Moss at the goal line 4-8 times and you’ve now really capped his ceiling.

When I spoke earlier of Carson being a BULL, he is extremely dependable in the 1st down category. In 2019, Carson had the 2nd most 1st down runs in the league behind only Zeke.On top of that, in 2019 Chris Carson had the 3rd most YAC for RB’s all while LEADING THE LEAGUE IN BROKEN TACKLES that year. 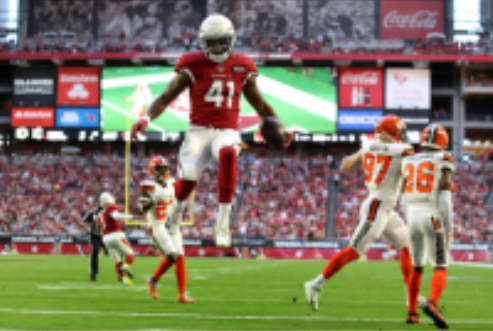 Kenyon Drake is a versatile powerful RB that’s been effective when used in the proper system. Being more effective in the run game throughout his career, Drake still flashes great pass catching chops.

He was released from the shackles of Gase and blossomed in Arizona for the remainder of the 2019 season, earning a transition tag. Things didn’t go the way Kingsbury envisioned, and I blame this on Kyler Murray. The kids a squirrel back there and takes off before checking down

to his RB. This resulted in Kenyan really never looking like himself, despite finishing just shy of 1,000 yards on the ground.

I encourage a change of scenery for Drake, and in this twisted scenario I want to see him in Seattle if Carson leaves! Again reports are coming out that Seattle wants to run the ball more and Drake is a guy who thrives as the game progresses.

Drake through his last 3 years has scored 206,214,and the 192 fantasy PPR points which is good for the RB 14,17 and 16 in their respective years. He has done this with ADAM turd GASE, switching teams mid season and then the emergence of Kyler the flying squirrel. Give him a lead role anywhere and expect well about the RB16!

Both Carson and Drake have slight injury concerns and I’m assuming will command about the same contract nearing 8 million a year. The most needy teams with money to afford a RB in that range are AZ, BUF, MIA, NYJ, and SEA.

Now that being said, I can make an apples to apples decision for these guys according to my preferred landing spots. I am going with Carson here because of his pass catching prowess, he’s a brawler, AND hes finished as an RB1 before which Drake has not. I am not fully expecting RB1 returns but I AM expecting high end RB2 and maybe flirt with back end RB1 numbers like in 2019. If I am a contender, I’m paying a couple of 2nds or a LATE 1st.